Anonymous October 24, 2019
CEO Mark Zuckerberg will be the next Facebook executive to face a bipartisan grilling when he testifies before the US House Committee on Financial Services tomorrow. The committee published a transcript of Zuckerberg’s prepared testimony ahead of the hearing, and there was one thing noticeably absent from his statement: any reference to bitcoin, cryptocurrency, or even blockchain.

That’s somewhat remarkable, given that Zuckerberg has been summoned to Capitol Hill to defend his company’s decision to launch its own blockchain-based cryptocurrency, the once-promising, now-floundering Libra. 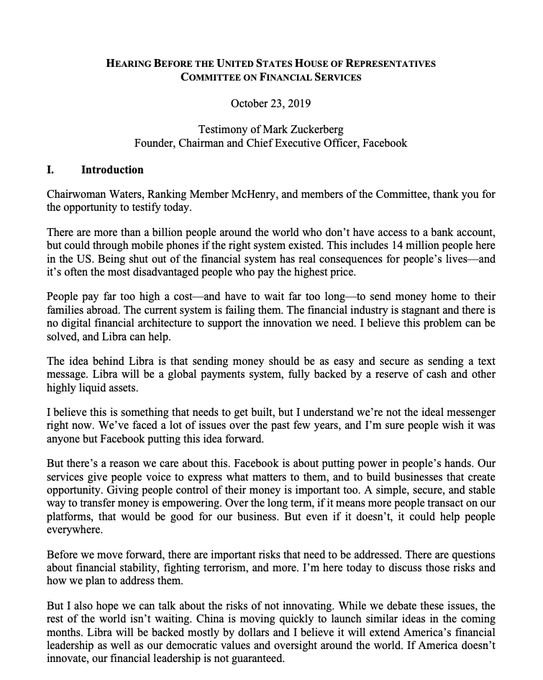 However, it’s also not surprising. While bitcoin (BTC), and to a lesser degree, altcoins like ethereum (ETH) and ripple (XRP), have made inroads into mainstream financial discussions, cryptocurrencies retain an uncomfortable stigma among specific demographics. Age is one of those demographic markers, and the average member of the House of Representatives was 57.6 years old when the 116th Congress convened in January.
Consequently, Zuckerberg wants to avoid loaded terms like “bitcoin” and “cryptocurrency” – the same buzzwords Facebook likely used to woo fellow tech companies to its Libra Association, which is already hemorrhaging members at an alarming rate.

Instead, he’ll couch his defense of Libra in less-threatening language, using terminology like “as easy…as sending a text message” and “digital payments.”
He’ll tell Congress:

“The idea behind Libra is that sending money should be as easy and secure as sending a text message. Libra will be a global payments system, fully backed by a reserve of cash and other highly liquid assets.”

Using vague terminology like “digital payments” and “this” to avoid using the c-word or b-word, Zuckerberg will also warn that cryptocurrencies like Libra are the future of finance and that if the United States fails to remain on the cutting edge of blockchain development, one of its geopolitical rivals will take the lead.

“A digital payments system is going to be important in the future. If America doesn’t lead on this, others will. Foreign companies or countries may act without the same regulatory oversight or commitment to transparency that we have.”