$50,000: Crypto Guru Reveals Dizzying Bitcoin Price Target - The Crypto Area | The Future of Money
About us FAQ Submit PR Submit Article Set up a wallet Market Update What Is Crypto ? The crypto rally has lots more runway ahead, even if the bitcoin price appears stuck. Trader and classical chartist Peter Brandt revealed his bullish prediction of $50,000 for the bitcoin price, which is currently holding steady at $5,000.
Investors must exhibit some patience, however, as it won’t happen overnight. Brandt expects that it will achieve this level over the next two-to-three years based on historical patterns that are resurfacing like a reflection in a mirror. Bitcoin continues to test resistance above the $5,000 mark. | Source: CoinMarketCap
There are countless bitcoin predictions out there, so what makes his so special? Unlike much of the other analysis, Brandt presciently called bitcoin’s 2018 destiny in which the leading cryptocurrency shed more than 80% of its value.
He identified a similar pattern in the charts in 2018/2019 that replicate the price movements from the 2013-2015 bear market period, after which time the bull market arrived. Technically speaking, that’s where the bitcoin price is trading today. He told Yahoo Finance:

“We saw sequential 10 up and down moves in the bear market, and we’ve almost identically formed that same sort of pattern. After the 2015 low in bitcoin, we saw the market then developed into a parabolic advance,” said Brandt, adding: “Based on those analog studies, I think crypto now will go back into a parabolic bull market.”

WILL THE BITCOIN PRICE RETEST 2018 LOWS?

While Brandt’s outlook is music to the ears of bitcoin investors, his crystal ball isn’t free of interference. Brandt has questions, too, chief among which based on the “analog year comparison is whether [the] 10a rally will lead to 10b retest similar to 2013-2015,” as depicted in the below chart. In other words, will the bitcoin price rally for a while before retesting late 2018 lows, which was $3,122 on Bitstamp, over the summer before climbing to $50,000? 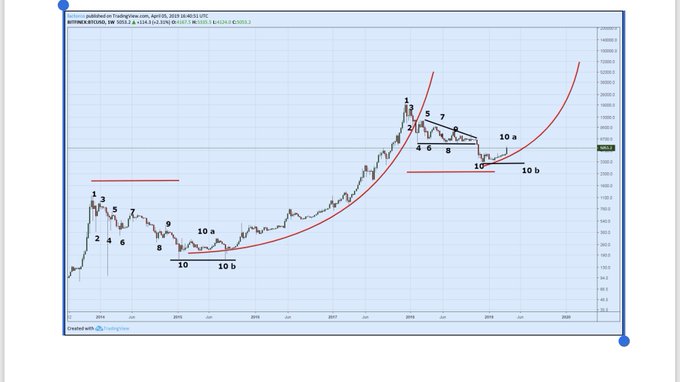 Whether that parabolic move has begun or bitcoin “takes a break” in the coming months, one thing is clear: the BTC price is headed for $50,000 between now and 2022.

“When bitcoin starts moving, it moves. It doesn’t hold up for everybody to catch a stagecoach,” said Brandt, who expects that bitcoin will leave its previous high of $20,000 in the dust.

Brandt, who has been trading for more than four decades, isn’t concerned with what’s driving the rally, just the “basic underlying demand for the coins themselves.” This is easier said than done, considering the unique nature of the cryptocurrency market whose only basis for comparison is about a decade. This differs from fundamental analysis, like that of Fundstrat’s Tom Lee, which will illuminate the catalysts behind the price moves. Lee is similarly bullish and told CNBC this week that bitcoin’s fair market value is currently $14,000.
Brandt, meanwhile, chalks up this week’s 20% bitcoin rally to good old “more buyers than sellers” – but also more urgency among buyers.
VexaGlobal / JOIN INCLUSIVE FOREX AND GET 1.6% DAILY /JOIN WEENZEE AND GET 1% DAILY
news
Next Post Previous Post
bitcoin,business,crypto,news