Binance and ShapeShift #DelistBSV; Kraken and Others Under Pressure - The Crypto Area | The Future of Money
About us FAQ Submit PR Submit Article Set up a wallet Market Update What Is Crypto ?

Following last week’s threat to do so, Binance has officially announced that Bitcoin SV will no longer trade on its popular platform as of April 22nd. Withdrawals must be made from the platform by July 22nd, according to an official post.
The reasons cited by Binance are “officious” in nature, but the community is fully aware this is related to Chenpeng Zhao’s annoyance at the antics of Craig Wright and Calvin Ayre, the most notable proponents of Bitcoin SV. Officially, the exchange lists several possible factors:
The last part is probably where Craig Wright’s wild west-style pursuit of the identity of @Hodlonaut fails the most. Some on Twitter have pointed out that Calvin Ayre and Craig Wright’s antics on the social network amount to unethical behavior. In a concise tweet, this user identified the ways that Bitcoin SV personalities have violated Binance’s code of conduct:
View image on Twitter 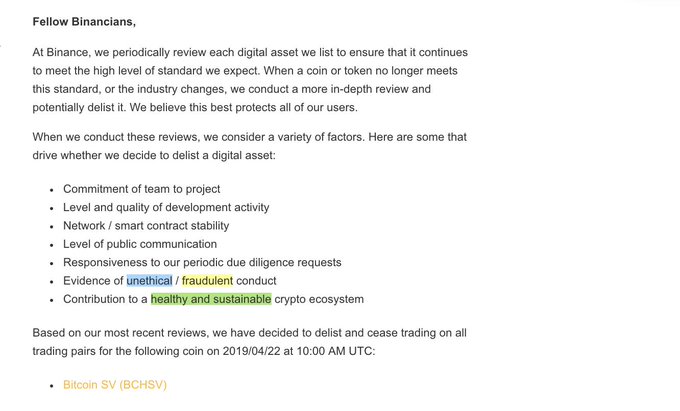 ShapeShift.io’s Erik Voorhees has also announced that his instant coin exchange will no longer support Bitcoin SV effective within 48 hours of the post (so in less than two days.)

1,845 people are talking about this
Erik Voorhees is an old-school cryptonaught and a libertarian. The pursuit and potential prosecution of a Twitter Bitcoin maximalist for speaking his mind about Craig Wright doesn’t sit well with many. Voorhees has previously made philosophical decisions as regards ShapeShift, like when the company chose to exit New York rather than attempt to comply with the BitLicense regulations.
Kraken also left New York in 2015, and the exchange is currently polling as to whether it should delist Bitcoin SV in solidarity with @hodlonaut and Binance. Kraken was reluctant when it initially listed BSV. Thus far the “yes” option has received over 70% support:

2,687 people are talking about this

The poll is not limited to Kraken users, unfortunately, making it a decidedly less accurate measure to use in decision making. However, the volume of Bitcoin SV across exchanges is statistically insignificant by comparison to several other cryptocurrencies, therefore the perceived lost revenue will be offset by the boost to optics. Overwhelmingly, Crypto Twitter wants justice for @Hodlonaut, and delisting is seen as a means of free market justice.

OTHER EXCHANGES, INCLUDING HUOBI AND OKEX, FEEL THE PRESSURE

Looking at other major markets who list BSV, their recent tweets are flooded with calls to delist BSV as well. Huobi, a long-time leader in crypto exchanges, is no exception. Seemingly, its recent tweets are more popular as a result:
View image on Twitter 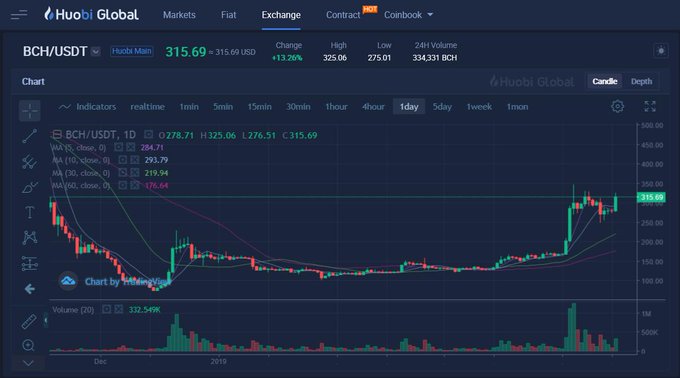 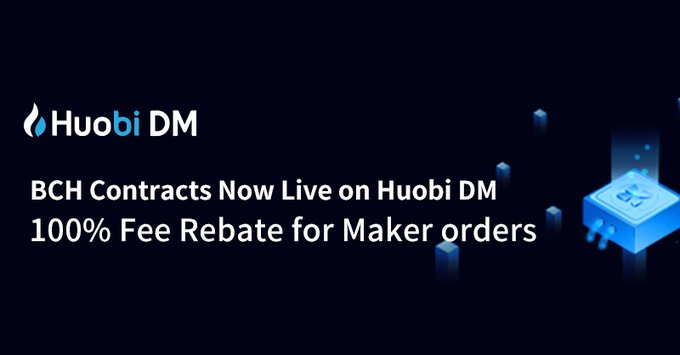 Don’t give chances to scammers
medium.com

@litecoinUSA
Speaking of Fraud... when are you going to #DelistBSV? What’s this partnership with @CalvinAyre all about? @OKEx is a pro-doxxing exchange now? #WeAreAllHodlonaut #WeAreAllPeter
21
1:31 PM - Apr 13, 2019
Twitter Ads info and privacy

's other Tweets
BitForex, which conducted most of Bitcoin SV’s volume over the past 24 hours at press time, posted a retweet about the Binance delisting recently, which may be foreboding for Bitcoin SV holders:

Anymore of this sh!t, we delist!

Garrett BitForex@GarrettBitForex
Craig is not Satoshi. Everyone is Satoshi.

It's funny that when Craig is unhappy that people don't believe his claim, he runs to his lawyer crying for help. pic.twitter.com/RuRCxkBujV
16
2:49 PM - Apr 12, 2019
Twitter Ads info and privacy 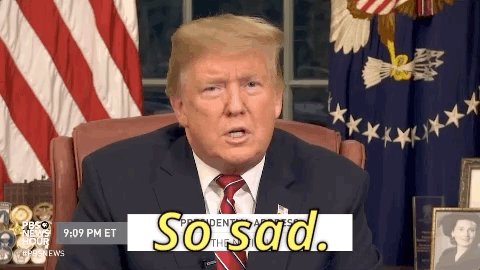 See Garrett BitForex's other Tweets
The company hasn’t officially announced a delisting, but it seems obvious where the exchange stands on the issue.

HitBTC, a popular altcoin exchange with many outstanding support requests and allegations against it, is so far quiet on the issue. They were the #10 exchange for BSV in the 24 hour period.
Bit-Z, the #8 exchange for BSV over the past 24 hours, has not made an announcement.
Another top exchange for BSV, CoinBene, hasn’t been pressured regarding BSV, but it’s facing other issues: 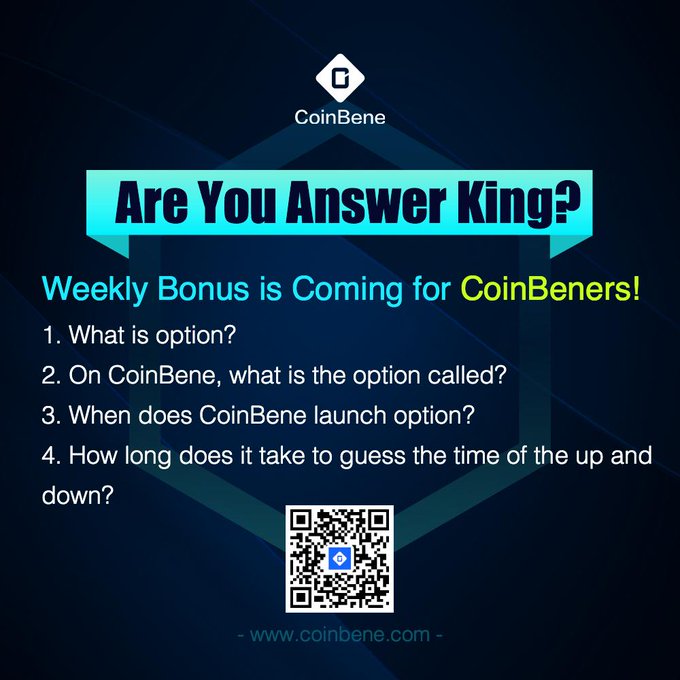 2 They go into ‘maintenance’

3 Your coins sell to Dex exchanges

4 @CoinBene pretend everything is just fine even though all your coins lost
7:09 AM - Apr 12, 2019
Twitter Ads info and privacy

See _KITAETS_'s other Tweets
Overall, the social momentum in the crypto space seems to be moving toward a mass delisting campaign against Bitcoin SV.

Calvin Ayre ✔@CalvinAyre
yup....this is a good time to open a Bitcoin SV exchange...just when one of the largest in Asia has kicked all the BSV customers to the curb over petulance. Business in a box :-) https://twitter.com/FloatSVcom
177
8:20 PM - Apr 15, 2019
Twitter Ads info and privacy

147 people are talking about this
Calvin Ayre seems calm, as does Craig Wright, who recently announced an actual lawsuit against Vitalik Buterin and other entities. The beef between Buterin and Wright stems from Buterin’s outburst at last year’s Deconomy conference, in which he was perhaps the first loudly declare Wright a “fraud.”
Buterin has not publicly commented on the legal action, although he has voiced support for delisting BSV:

This is my favorite feature of Uniswap: the adding of assets is permissionless and they cannot be delisted

45 people are talking about this
He also indicated that he won’t be launching any counter-suits:

Funnily enough, Calvin Ayre called Vitalik a fraud himself just two days ago. https://twitter.com/calvinayre/status/1115369797427056640?s=21 …@VitalikButerin are you going to sue Calvin now as well for defamation?

See Vitalik Non-giver of Ether's other Tweets
Buterin made that statement before the announcement that he’d been hit with some legal work similar to that leveled @Hodlonaut, however. The story of Ethereum’s actual creator and Bitcoin’s self-proclaimed creator seems to be just beginning, it seems.
VexaGlobal / JOIN INCLUSIVE FOREX AND GET 1.6% DAILY /JOIN WEENZEE AND GET 1% DAILY
Next Post Previous Post
blockchain,crypto,news