XRP Swells 13.06% in a Sharp Recovery as Ripple ETPs Take Off - The Crypto Area | The Future of Money
About us FAQ Submit PR Submit Article Set up a wallet Market Update What Is Crypto ? 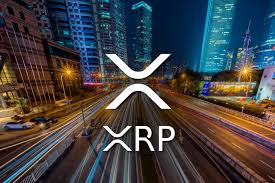 Ripple was a big mover this Friday as the company saw its XRP price rise nearly 13-percent ahead of the European market open.
The XRP-to-dollar rate today established an intraday high towards $0.372 at about 0515 UTC. Earlier the same day, the pair was moving downwards in a massive bearish correction wave that confirmed a reversal upon testing 0.329. The bounce back move came on a substantial volume with far more XRP changing hands against Tether’s stablecoin USDT, South Korean Won, and Bitcoin’s BTC. RIPPLE’S XRP PRICE JUMPS OVER 13-PERCENT IN INTRADAY CORRECTION | SOURCE: COINMARKETCAP.COM
Data on CoinMarketCap.com reported that XRP-enabled pairs conducted $2.351 billion worth of trades in the past 24 hours. At the same time, Yahoo Finance noted the same volume was around $49.84 million on a real-time basis.

Ripple, as a company, witnessed developments on the business front this week. A blockchain initiative launched by the European Commission introduced Ripple as a crucial associate. In another event, the company forged a partnership with UK-based RationalFX to lend its RippleNet payment services. And effectively today, Nordic Growth Market, a regulated exchange owned by the Germany-based Boerse Stuttgart, introduced XRP tracking exchange-traded products to the EU investors.
The announcement opened XRP’s prospects further among the institutional investors’ class.
There is no evidence that XRP’s sharp intraday recovery today followed a set of positive fundamental news from the press. The coin was already moving upwards in the line of the rest of the cryptocurrency market since April 2. The leading cryptocurrency bitcoin started correcting lower yesterday. Other cryptocurrencies also tailed bitcoin’s interim downside trend, including XRP. It is only upon today’s European market open XRP decoupled itself from bitcoin.

XRP’s upside recovery didn’t extend beyond a crucial resistance area, defined by a $0.372-0.379 range, for the third time in the last three days. As of now, the asset was preparing itself for another run towards the same area.
The broader context shows that XRP price action was forming an inverse head and shoulder pattern. The asset today confirmed a neckline formation upon pulling back from an upside action and was supported by a shoulder formation to the downside. It is now hinting three possible scenarios: consolidation, breakdown, and breakout.
In consolidation, XRP will trend sideways while testing neckline as resistance and shoulder-line as support. Meanwhile, in the breakdown, the asset will break below the shoulder-line to look for a potential bounce back near its 50-EMA (indicated via blue curve). In the breakout, XRP will retest neckline and break above it to find a new upside target.
Click here for a real-time XRP price chart.
Next Post Previous Post
crypto,news,ripple