Amazon, Bitcoin, and The Future

It appears that Amazon may become the next Fortune 100 company to dive in the deep end of the bitcoin and crypto industry. There are a lot of rumors floating around, so let’s start with what we know for sure. 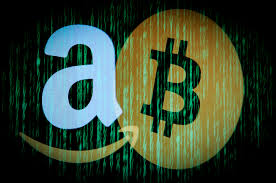 Amazon recently published a new job posting that is seeking a digital currency and blockchain expert. The description expands to include a desire to find an “experienced product leader to develop Amazon’s Digital Currency and Blockchain strategy and product roadmap.”

The job posting goes on to state “you will leverage your domain expertise in Blockchain, Distributed Ledger, Central Bank Digital Currencies and Cryptocurrency to develop the case for the capabilities which should be developed, drive overall vision and product strategy, and gain leadership buy-in and investment for new capabilities.”

CNBC asked an Amazon spokesperson for comment and received this in a statement:

“We’re inspired by the innovation happening in the cryptocurrency space and are exploring what this could look like on Amazon. We believe the future will be built on new technologies that enable modern, fast, and inexpensive payments, and hope to bring that future to Amazon customers as soon as possible.”

The timing of the job posting is interesting because it comes at a time when bitcoin and other cryptocurrencies have fallen significantly in value. There has been less mainstream media or corporate attention on the industry compared to approximately 100 days ago.

While these facts are not necessarily telling of Amazon’s exact plans, it is important for us to know what is certain. Now let’s look at the rumors. In a widely distributed article over the weekend, someone claiming to be an insider had the following to say:

“This isn’t just going through the motions to set up cryptocurrency payment solutions at some point in the future – this is a full-on, well-discussed, integral part of the future mechanism of how Amazon will work,” she told City AM.

“It begins with Bitcoin – this is the key first stage of this crypto project, and the directive is coming from the very top… Jeff Bezos himself.”

The insider also explained that directors of the world’s fourth largest company were keen to move towards ticking off other big cryptocurrencies once it had established a fast and secure method of Bitcoin payment.

“Ethereum, Cardano and Bitcoin Cash will be next in line before they bring about eight of the most popular cryptocurrencies online,” she added.

“It won’t take long because the plans are already there, and they have been working on them since 2019.

“This entire project is pretty much ready to roll.”

It is likely that the involvement of a massive player on the scale of Amazon in the cryptocurrency space would advance adoption and price of Bitcoin and the larger alt coins, but it is Bezos’ next plan which could cause even greater intrigue.

“When all these crypto ducks are lined up, there’s another twist to push things even further into Amazon’s favour – a native token,” the insider explained.

“After a year of experiencing cryptocurrency as a way of making payments for goods, it is looking increasingly possible that we’re heading towards tokenisation.

“This then becomes a multi-level infrastructure where you can pay for goods and services or earn tokens in a loyalty scheme.

“There’s little more to it, for now, but you can guarantee the Bitcoin plan will be monitored closely as opportunities with Amazon’s own version of a crypto will be explored.”

It is obviously impossible to know how much of this is true. We don’t even know if this insider actually knows what is happening. But these comments serve as a great starting point for the potential opportunities that Amazon could pursue as they push further into the industry.

The easy answer is to simply accept bitcoin as a means of payment, while also converting some of their $73 billion in cash into the digital currency. They wouldn’t be the first to do this. Companies like Tesla, Square, and Microstrategy have pioneered that decision in the last 12 months or so.

If you believe that every company will eventually choose to park some of their cash in the digital currency, then Amazon’s decision to do this would just be a matter of time.

The second body of work would likely be the acceptance of various other cryptocurrencies. While this makes less sense to me, it feels like it would be a natural extension of the bitcoin decision. After that, I could see Amazon expand on their current blockchain infrastructure offering.

For context, Amazon already has a product called “Amazon Managed Blockchain” and describes it like this:

“Amazon Managed Blockchain is a fully managed service that allows you to join public networks or set up and manage scalable private networks with just a few clicks. Amazon Managed Blockchain eliminates the overhead required to create the network or join a public network, and automatically scales to meet the demands of thousands of applications running millions of transactions.

Once your network is up and running, Managed Blockchain makes it easy to manage and maintain your blockchain network. It manages your certificates and lets you easily invite new members to join the network.”

These companies have offerings that will either be complementary or competitive with Amazon’s infrastructure efforts depending on the path they choose to go.

Aside from this infrastructure angle, Amazon is reportedly also looking at potentially creating their own digital coin. It is important to point out that Amazon already has a few different versions of digital assets. They have gift cards that can only be used within their ecosystem. They have AWS credits that are created out of thin air and can only be used to redeem for specific Amazon services.

Obviously, Amazon hasn’t actually created a digital token of their own already. But they do have numerous offerings that already present the same value propositions that you would gain by creating a token. I’m not saying whether this is a good or bad idea, but rather that it simply is what it is.

Any digitization or tokenization of these offerings will simply be technical innovations on top of the existing value that Amazon knows can be captured.

It will be a big deal for the crypto industry if they do it, but there is also a bear argument to be made that they don’t need decentralization technology in order to extend the same value prop.

With that said, one of the most interesting aspects of this conversation is that it is all happening with the backdrop of anti-trust threats.

Could we see a world where Amazon (and other tech companies) decide to attempt some form of decentralization? Maybe they can’t move to decentralize everything, but could they potentially try to capture or create value with some new technology that moves a piece of their business further from the reach of regulators or nation states?

I don’t see why not. Facebook is talking about becoming a metaverse company and Bezos/Amazon love to find unique paths to sustainable, efficient, and resilient products.

I don’t know much more than you do when it comes to Amazon, but the world’s largest company is unlikely to sit on the sidelines forever when there is so much tangible innovation happening. Maybe they can figure it out, maybe they can’t.

But it would be ignorant for them not to try. Whether we are talking about buying bitcoin, accepting bitcoin, building infrastructure services, or creating their own token, I don’t anticipate the bitcoin/crypto industry to be without Amazon’s participation for much longer.