Miami was once coined the ‘crypto capital’ by its mayor, but how are things looking now? 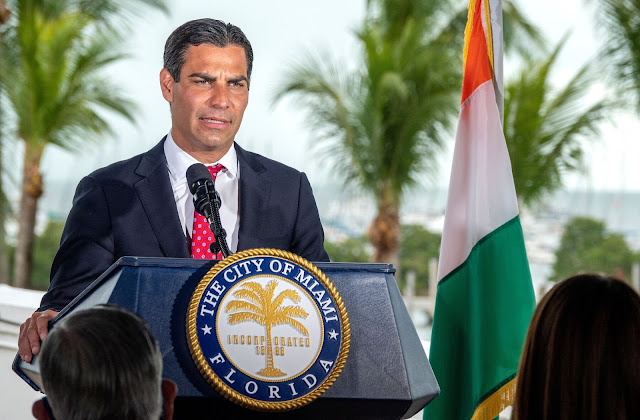 MIAMI – The crypto-currency world has been shaken following the arrest of Sam Bankman-Fried, the founder of crypto company FTX.

He is facing several federal charges including wire fraud and money laundering after his high-profile firm lost billions of dollars for investors.

The 13-page indictment accuses Bankman-Fried of devising a scheme to defraud customers and investors, using money to pay for expenses and debts at his crypto hedge fund Alameda Research and to make lavish real estate purchases, and large political donations.

So what does this mean for Miami the home of FTX Arena?

Additionally, City of Miami Mayor Francis Suarez has been an advocate of the cryptocurrency Miami Coin.

Wall Street has its bull and Miami has one too, a symbol of the “crypto capital” as the mayor once coined it.

“MiamiCoin is only in its first year, a lot of these technologies are very young, some of them are going to change the dynamic, and some of them won’t, Suarez said in June of this year.

The city’s namesake cryptocurrency worth more than a nickel when it debuted a little more than a year ago.

A few months later, the mayor tweeted his excitement for the city’s first withdrawal from its digital wallet, which was more than $5 million, “resources” for the city “through innovation, not taxation,” he wrote.

One twitter user who was quick on draw asked the mayor if he had anything to say about those who bought the touted MiamiCoin and lost more than 80 percent of their investment and later questions the “ethics” and “legalities” of the mayor’s clapping for crypto.

At last check on Tuesday, MiamiCoin was worth about five-ten thousandths of a cent.

Alex Dominguez lives in Miami and is the Chief of Investor Relations at Unicoin, a next generation cryptocurrency.

“That’s a lot of money being lost, a lot of investors getting burned, and at some point, somebody’s going to be held accountable,” he said.

The hope is that the “somebody” he mentions isn’t the city.

Dominguez says ongoing crypto crashes and the FTX fallout will only speed up regulation and increase scrutiny.

“It remains to be seen what the SEC actually does and who they go after, but it wouldn’t be surprising for them to go after the municipality who actually benefited,” he said.

In the mayor’s defense, Dominguez says he didn’t see it coming and no taxpayer money was used to launch MiamiCoin. The city does not manage the currency.

“We didn’t actually pay for anything,” he said. “It’s basically a reputation that’s tarnished.”

Dominguez was asked if he thinks MiamiCoin will make it.

“I think it’ll disappear because there’s really no intrinsic value,” he said.

Local 10 News reached out to Mayor Suarez’s office and has not received a reply.

Disclaimer: The opinion expressed here is not investment advice – it is provided for informational purposes only. It does not necessarily reflect the opinion of TheCryptoArea. Every investment and all trading involves risk, so you should always perform your own research prior to making decisions. We do not recommend investing money you cannot afford to lose.
Advertisment
Tags
bitcoin crypto exchanges mediaroom news
Related Article