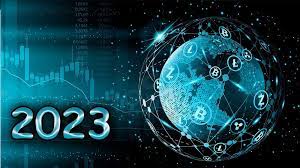 In a year of outsized challenges for almost every asset class, crypto assets took some of the largest hits in 2022, and VanEck had plenty to say about it. The spectacular collapse of FTX and ongoing waves it has sent through the crypto economy are likely to continue playing out into 2023, and VanEck’s Matthew Sigel, head of digital assets research, outlined the current case for bitcoin, noteworthy crypto moments of 2022, and predictions for crypto in 2023 in a recent media presentation.

The Argument for Bitcoin

There are over 15 currencies that are down more than 20% year-to-date, with more than 2.1 billion people living in a country with inflation higher than 7%. Alongside the pressures on currencies, there is also an environment of increasing financial censorship globally that creates a foundational and sustained demand for neutral money, such as cryptocurrencies.

Remittance prices also remain a heavy cost to some of the poorest countries: many currently have remittance fees between 15%-25%. In countries that have established a central bank digital currency, remittances remain a low priority, making bitcoin and cryptocurrencies an attractive option even in countries with existing CBDCs.

Despite bitcoin price volatility this year and bitcoin down 77% from its highs, those that hold bitcoin for longer than six months (referred to as HODLing in crypto terminology) have actually increased despite holding that cryptocurrency at a loss — it’s actually the highest number of bitcoin held at a loss on record.

Bitcoin has “a very loyal community that is attracted by neutrality, censorship resistance, and cross-border remittance opportunity,” Sigel explained.

2022 noteworthy events that advisors and investors might have missed included the increasing partnerships of Fortune 500 companies using cryptocurrencies, crossing the 50% threshold later in the year, and VanEck published its own proposed regulatory framework for custodial stablecoins.

Other key moments for the year: Stripe announced marketplaces and platforms could pay using USDC stablecoin and have recently expanded to include 16 other cryptocurrencies; Cash App expanded to allow users to transact in BTC on the Lightning Network, the second layer network built on top of the bitcoin blockchain; and Central Africa Republic became the second country globally to adopt bitcoin as a legal tender.

Tokenization was also a big trend of 2022: MakerDAO passed a governance proposal that will allow vaulting real world assets such as U.S. short-term Treasuries and investment grade corporate bonds in part of its investment strategy. Tokenization is a trend VanEck anticipates to continue, particularly within security tokenization, with financial institutions tokenizing more than $25 billion in the next year in off-chain assets.

The Most Likely Crypto Predictions for 2023

Looking ahead, bitcoin could test $10,000-$12,000 as bitcoin miner bankruptcies increase due to the drop in bitcoin value and increasing electricity costs. VanEck is anticipating that many miners will be forced to restructure or merge in attempts to find capital in challenging times.

“This bitcoin mining sector is under extreme duress right now. We have an index which tracks the publicly traded companies in this sector; the median market cap is now below $200 million, and every one of these companies is burning cash, trading well below book value,” Sigel explained.

That said, VanEck is optimistic that there is potential for bitcoin to rebound to $30,000 in the second half of 2023 as inflation declines. Bitcoin is also set to halve in 2024, an event that happens typically every four years and has traditionally driven up the value ahead of halving.

“We acknowledge that bitcoin has been trading like a risk asset. The sensitivity to higher rates has been higher than I expected and one reason for that is that the political response to inflation in the developed markets has been to cap energy prices, widen sanctions; in a sense, micromanage economic activity to facilitate this energy transition,” creating a challenging thesis for bitcoin mining, Sigel explained.

VanEck is also predicting that Ripple will lose its case against the SEC in the first quarter of 2023 due to the SEC’s win against blockchain-based publishing company LBRY last month.

In more positive outlooks, security tokenization is anticipated to accelerate as more financial institutions tokenize off-chain assets, and Brazil will continue to lead the way in sovereign tokenization with Itau Unibanco, the largest bank in Brazil, launching a platform for tokenizing assets soon. Twitter could also dip its toes further into integrating crypto in 2023: the platform currently allows for bitcoin peer-to-peer tipping over the Lightning Network but could broaden to allow payment functionality beyond just tipping that could include bitcoin and dogecoin.

Disclaimer: The opinion expressed here is not investment advice – it is provided for informational purposes only. It does not necessarily reflect the opinion of TheCryptoArea. Every investment and all trading involves risk, so you should always perform your own research prior to making decisions. We do not recommend investing money you cannot afford to lose.
Advertisment
Tags
bitcoin crypto exchanges mediaroom news
Related Article