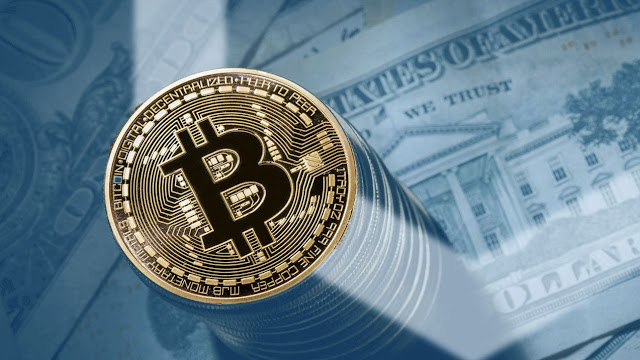 Bitcoin continued its climb Monday as traders took news of another crypto bankruptcy in their stride and placed bets on a Federal Reserve “pivot” to cutting interest rates.

The price of the No. 1 token briefly topped $23,100 Monday, after touching $23,333.83 Saturday for the first time since Aug. 19, according to Coin Metrics. The jump brings bitcoin up almost 39% since the start of January.

Bitcoin has kicked off 2023 on a positive note, with investors hoping for a reversal in the monetary tightening that spooked market players last year.

The Fed and other central banks began cutting interest rates in 2022, shocking holders of risky asset classes, like stocks and digital tokens. Publicly-listed tech stocks and private venture capital-backed start-ups particularly took a beating, as investors sought protection in assets perceived as safer, such as cash and bonds.

With inflation now showing signs of cooling in the U.S., some market players are hopeful that central banks will start easing the pace of rate rises, or even slash rates. Economists previously told CNBC they predict a Fed rate cut could happen as soon as this year.

“Fed tightening seems to be lighter and inflation less of a risk,” Charles Hayter, CEO of crypto data site CryptoCompare, said in emailed comments to CNBC. “There is hope there will be more caution to rate rises globally.”

The Fed is likely to keep interest rates high for the time being. However, some officials at the bank have recently called for a reduction in the size of quarterly rate hikes, wary of a slowdown in economic activity.

The world’s top digital currency, bitcoin, is “increasingly looking like it has put in its bottom,” according to Vijay Ayyar, vice president of corporate development and international at crypto exchange Luno.

Bitcoin short sellers have been squeezed by sudden upward moves in prices, according to Ayyar. Short selling is an investment strategy whereby traders borrow an asset and then sell it in the hope that it will depreciate in value.

A wipe-out of those short positions sparked by the rising price of bitcoin has added “fuel to the fire,” Ayyar said, as short sellers are forced to cover their bets by buying back the borrowed bitcoin to close them out.

What crypto collapse?
Investors don’t seem to have been greatly perturbed by the collapses of top crypto companies, stemming from the fallout of digital currency exchange FTX’s insolvency in November.

“The Genesis debacle has been playing out for a while and is likely priced in already. FTX, on the other hand, has already had a significant impact on many investors, on market psychology and on the prices of several toxic assets,” Mati Greenspan, founder and CEO of crypto investment advisory firm Quantum Economics, told CNBC.

“It should be noted however that the price on bitcoin itself is quite limited since FTX didn’t have any on their balance sheets.”

Bitcoin is still about 67% off its all-time high, despite its recent surge.

The latest crypto plunge is different from past cycles, in large part due to the role played by leverage. Major crypto players became entangled in risky lending practices, offering lofty yields that many investors now say were unsustainable.

This began in May with the collapse of terraUSD — or UST — an algorithmic stablecoin that was supposed to be pegged one-to-one with the U.S. dollar. The failure of UST brought down terraUSD’s sister token luna and hit companies with exposure to both tokens.

Three Arrows Capital, a hedge fund with bullish views on crypto, plunged into liquidation because of its exposure to terraUSD.

Then came the November collapse of FTX, one of the world’s largest cryptocurrency exchanges. It was run by Sam Bankman-Fried, an executive who was often in the spotlight.

The fallout from FTX continues to ripple across the cryptocurrency industry. Roughly $2 trillion of value has been erased from the overall crypto market since the peak of the crypto boom in November 2021, in a deep downturn known as “crypto winter.”

WATCH NOW
VIDEO09:56
FTX’s collapse is shaking crypto to its core. The pain may not be over

One analyst cautioned that technical indicators suggest there could be some pullback from the token’s recent rally.

Yuya Hasegawa, crypto market analyst at Japanese bitcoin exchange Bitbank, said that while bitcoin’s trend indicators are “generally signaling a strong upward trend,” its relative strength indicator, or RSI, “is diverging from the price’s upward movement and starting to slide down, which is not a good sign for the current price trend.”

“Bitcoin could test its August high and be supported at the $20k~$21k level, but with its RSI’s divergence and a couple of big tech earnings ahead this week, it could get quite unstable,” Hagesawa said in a Monday note.

The recent bitcoin price boost has nevertheless offered some investors hope that the ice may be starting to thaw.

Greenspan said upward moment in bitcoin is typical of the cryptocurrency, as investors anticipate the next so-called “halving” event — a change to the bitcoin network that reduces rewards to miners by half. It is viewed by some investors as positive for the price of the token, as it squeezes supply.

The next halving is slated to take place sometime between March and May of 2024.

Disclaimer: The opinion expressed here is not investment advice – it is provided for informational purposes only. It does not necessarily reflect the opinion of TheCryptoArea. Every investment and all trading involves risk, so you should always perform your own research prior to making decisions. We do not recommend investing money you cannot afford to lose.
Tags
bitcoin blockchain crypto news
Related Article