Presidential Candidate Andrew Yang Discusses His Plan for Cryptocurrencies - The Crypto Area | The Future of Money
About us FAQ Submit PR Submit Article Set up a wallet Market Update What Is Crypto ? 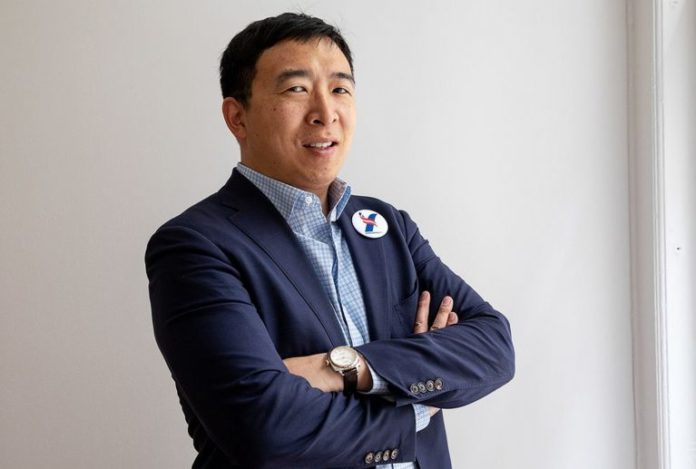 Presidential candidate Andrew Yang has detailed his plans to regulate the digital economy if he were to become the President of the United States. Yang’s recent blog post called “Regulating technology firms in the 21st century,” explains how the candidate believes current American legislators are out of touch with innovative technologies.
Also Read: Bybit launches ‘BTC Brawl’ competition

The 2020 Democratic Presidential candidate Andrew Yang wholeheartedly believes technology has outpaced the American government’s understanding of it. In a blog post written on Thursday, Yang wrote that the government allows giant tech companies to thrive, but falls short on protecting users from the same firms scouring data.

Yang highlighted that during the congressional hearings with Facebook CEO Mark Zuckerberg, the meetings “exposed the lack of basic understanding of technology by members of our Congress.” In the latter half of Yang’s post, the presidential candidate discussed cryptocurrencies and video game loot boxes. Yang believes the U.S. government needs to be “forward-thinking and informed” about digital assets so they don’t “stifle innovation.”
“Cryptocurrencies are seeing levels of fraud because of the lack of regulation,” Yang writes. “Other countries, which are ahead of us on regulation, are leading in this new marketplace and dictating the rules that we’ll need to follow once we catch up.” Yang’s post emphasizes that digital currencies now represent an enormous amount of value and economic activity “outstripping government’s response.” The candidate thinks a national standard has yet to emerge and there are several conflicting jurisdictions when it comes to cryptocurrencies. Yang added:

Currently, different departments of the federal government consider digital assets as property, commodities, or securities. Some states have onerous regulations in the space, such as New York’s Bitlicense. Navigating this has had a chilling effect on the U.S. digital asset market.

Yang says as President he will promote legislation that provides clarity on cryptocurrency-digital asset market space, have the government define what a token is and when it is a security and also clarify the tax implications of owning, selling, and trading digital assets. Despite Yang being open to forward-thinking concepts like legalizing marijuana on the federal level, lots of digital currency influencers and libertarians believe his leftist views are concerning.

Crypto enthusiasts who lean more toward the libertarian side believe that Yang is just another socialist planning to redistribute wealth. For instance, Yang wants to give every American money with a universal basic income (UBI) plan but the funds will be taken from someone else. All the 2020 presidential candidates whether they are running with the left or right want more government. Yang wants to “create one national framework” for technologies like cryptocurrencies, but doesn’t realize many people believe digital currencies were born to disrupt nationalized frameworks.
What do you think about Andrew Yang’s “Regulating technology firms in the 21st century” blog post that details how he would handle cryptos if he were president? Let us know what you think about this subject in the comments section below.
Image credits: Shutterstock, Wiki Commons, Fair Use, Yang2020, Pixabay, and Twitter.
Did you know you can buy and sell BCH privately using our noncustodial, peer-to-peer Local Bitcoin Cash trading platform? The local.Bitcoin.com marketplace has thousands of participants from all around the world trading BCH right now. And if you need a bitcoin wallet to securely store your coins, you can download one from us here.
The post Presidential Candidate Andrew Yang Discusses His Plan for Cryptocurrencies appeared first on Bitcoin News.