The crypto market has begun to demonstrate signs of new momentum as bitcoin slightly recovered to over $5,200 and other major crypto assets like Ethereum and EOS recorded large gains on the day.
According to trader Jonny Moe, bitcoin is close to breaking the 200-day simple moving average (SMA) cross for the first time since October 2015. The performance of the bitcoin price in the past three months (source: coinmarketcap.com)
SMA is considered as a key technical indicator to determine the long-term trend of an asset or a market.

ARE BITCOIN AND CRYPTO LOOKING TOWARD ACCUMULATION PHASE?

“BTC about to have its first bullish 20-200 SMA cross since Oct 2015. Note that it took 2 of these crosses before the uptrend began. I’m not usually one to try and call out absolutes like ‘the bottom is in, but it’s certainly shaping up like that could be a real possibility.”

Other indicators such as volume have also shown strong demand from investors in the global market for bitcoin in recent weeks.

On Tuesday, Bloomberg reported that the volume of the CME bitcoin futures market hit a record high on April 4 at 22,542 contracts worth about $542 million.
CCN reported that the futures volume is important to consider when evaluating the general trend of the cryptocurrency market because it accounts for a relatively large portion of the trading volume of bitcoin.
With real volumes on the rise, disregarding most of the volume in the cryptocurrency exchange market, and long-term technical indicators such as the 200-day SMA cross portraying a rather positive medium-term trend for bitcoin, many traders remain optimistic on the recent price movement of crypto assets.

STRONG GAINS ON THE DAY

As bitcoin rebounded to $5,200, Ethereum surpassed $180, EOS recorded a 6 percent gain, and Binance Coin increased by about 2.8 percent, demonstrating solid gains against the U.S. dollar.
The short-term recovery in the prices of crypto assets led the valuation of cryptocurrency funds to rebound, allowing Grayscale’s assets under management to surpass $1.2 billion.
View image on Twitter 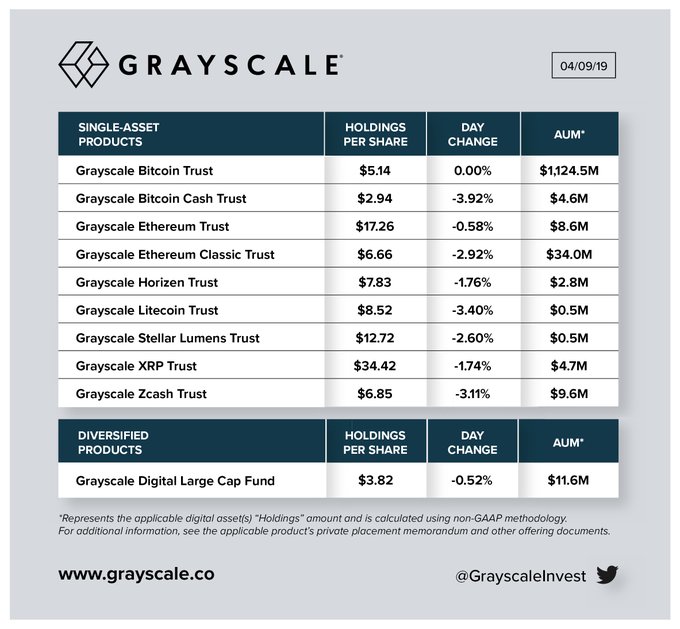 Grayscale ✔@GrayscaleInvest
4/9/19 UPDATE: Holdings per share and net assets under management for our investment products

See Grayscale's other Tweets
Twitter Ads info and privacy
Although the near-term performance of bitcoin and the rest of the cryptocurrency market largely depend on the materialization of strong enough stimuli to push the market up in a similar manner as April 1, analysts remain optimistic on the positive technical indicators.
Technical analyst Josh Rager said that the exponential moving average (EMA) of bitcoin turned green or positive for the first time in 16 months.
View image on Twitter

CAN THE MOMENTUM BE SUSTAINED?

In the past month, the bitcoin price has increased by around 20 percent against the U.S. dollar and as such, some believe that the dominant cryptocurrency may be overbought.
It remains to be seen whether the momentum of the cryptocurrency market can be sustained over the next several months or if a prolonged period of stability could emerge.
But, if alternative cryptocurrencies such as Ethereum, Litecoin, and tokens continue to demonstrate fairly large gains against both bitcoin and the U.S. dollar, it could continue to fuel the confidence of investors.
Click here for a real-time bitcoin price chart.
Tags
bitcoin crypto news
Related Article